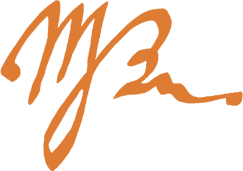 “Art in and for the community is different than other types of artwork in that it presents to the artist the challenge of a very broad audience and the opportunity to make art that is a blend of artist and community. I hope that when a mural committee works with me they value me not just as a painter but as a good listener and intelligent, responsive partner. As a commission artist, I feel no need to act out the cultural myth of artist as isolated visionary”

Best known as a muralist, Michael has completed murals and public art projects in cities across North Carolina and in Virginia, West Virginia, New York, Florida, Chicago and Baltimore. As part of the Chapel Hill/UNC bicentennial celebration, he was commissioned to do a mural painting for the Franklin Street Post Office as a companion piece to an existing mural by the distinguished Depression-era artist Dean Cornwell. His large realistic historical paintings also circle the walls in the historic Orange County District Court in Hillsborough, the rotunda of the Main Branch of the Greensboro Public Library, the Veterans Museum in Tarboro, and at other sites supported by local civic groups.

His work can be seen in various locations on the campuses of the University of North Carolina, Duke University and Caldwell County Community College and North Carolina Central University. He has contributed to or been featured in the Durham Herald, the News and Observer, Carolina Alumni Review, Our State, Chapel Hill Magazine, Oxford American, the Independent, the Village Voice, Baltimore Sun, and numerous other periodicals, television and radio appearances.

In the past he has served on the Chapel Hill Appearance Commission, in the creation of the Public Arts Commission of Chapel Hill, and as a juror for local art competitions. He helped organize the Carrboro Art Group, an artists’ co-op that, among other things, created elaborate floats for North Carolina holiday season parades in the 1990s. He has become well known for his public art partnerships with many school and civic groups over three decades.

Michael holds a BFA from UNC Chapel Hill and resided as an artist fellow for two years at the Fine Arts Work Center in Provincetown, Mass. Early in his career he taught art in private and public schools in New York City, including for the Guggenheim Museum in a program for at-risk students, and at Meredith College. He received a mural painter’s conference fellowship from the National Academy of Design.

Michael has created a large body of studio art work. He has had one-man exhibitions at the Somerhill Gallery of Durham, The Mahler Gallery in Raleigh and the Eno Gallery in Hillsborough, the Horace Williams House of Chapel Hill, the Skylight Gallery of Hillsborough. He has been commissioned by or exhibited work in the boardroom of the North Carolina Museum of Art, The Fine Arts Center Gallery in Provincetown, Mass., Raleigh Contemporary Gallery, ERL Originals of Winston Salem NC, the Chapel Hill Museum (a retrospective), the Kirby Gallery in Roxboro NC, and the NC Crafts Gallery in Carrboro. He is currently represented by the Eno and Mahler galleries.

“His are some of the most popular and successful examples of public art painted on the walls of our town and have become downtown landmarks.”